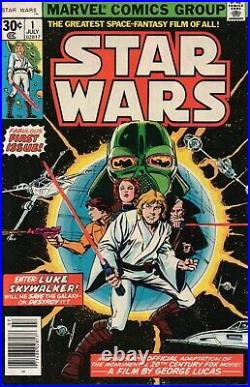 Star Wars #1 (FN-) July `77. Written by Roy Thomas. Art by Howard Chaykin. 1st printing, standard 30 Cent Newsstand Edition with UPC. Part 1 of 6. Based on the screenplay by George Lucas. Adapted by Roy Thomas. Art by Howard Chaykin and Steve Leialoha. A Long time ago, in a galaxy far, far away… The galaxy is engrossed in an intergalactic civil war. A small band of freedom fighters led by Princess Leia opposes the evil Galactic Empire and steals the plans to their most destructive weapon, the Death Star. Darth Vader, the most feared name in the galaxy, will stop at nothing to recover those stolen plans and the location of the Rebel’s secret base of operations. Now, it’s up to farm boy Luke Skywalker and a motley band of heroes to save the Princess and the galaxy from the darkness that has engulfed it. FN- (Fine Minus), shows heavy wear, creases etc. Thank you for choosing to shop here at The Comic Book Circus. We enjoy good communications with our customers, and provide a fast and friendly service. With over twenty years trading in the comics industry you can be sure of a first class service. Please look at the other books on the C. Shop, we are constantly expanding both the range and depth of our stock. From the mainstream to the obscure, we aim to make your shopping experience as straight forward and hassle free as possible. The item “Star Wars #1 (FN-)`77 Thomas/ Chaykin (1st Print)” is in sale since Tuesday, August 17, 2021. This item is in the category “Books, Comics & Magazines\Comic Books & Memorabilia\Comics\Comics & Graphic Novels”. The seller is “hamsterklf76″ and is located in Leeds. This item can be shipped worldwide.