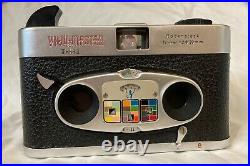 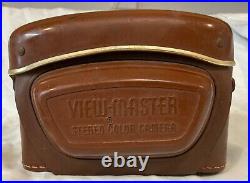 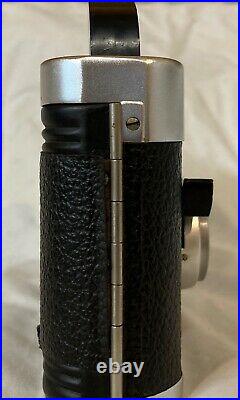 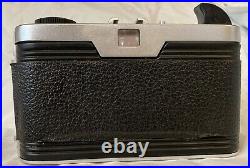 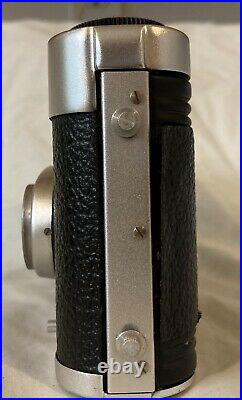 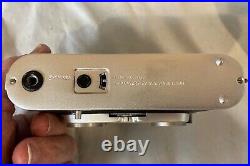 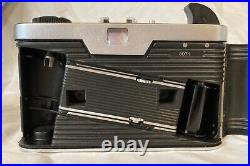 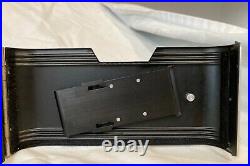 Vintage VIEW-MASTER Camera 35mm film Stereo 3D Color (Mark II) with case-Germany. A Stereo camera is a camera that has two lenses about the same distance apart as your eyes and takes two pictures at the same time. This simulates the way we actually see and therefore creates the 3D effect when viewed. View-Master Stereo Color, Mark II. In 1961, Sawyer Europe began producing the View-Master Mark II. This camera had fixed focus and was designed to produce images for View-Master reels. Instead of the straight two pass image format of the View-Master Personal, the Mark II features a diagonal film path which exposes the film in one pass and yields 75 pairs on a 36-exposure roll instead of 69. It features a cold shoe, as well as both “X” and “M” contacts, so it should work with most modern electronic flash units with the proper cord. Instead of separate shutter speed and aperture settings, the Mark II features a single dial that sets exposure values. _ feet to infinity. The Mark II features an exposure table adjustable for different film speeds. Film advance is through a trigger shaped “rapid wind” button that advances the film when it is pushed down. Eugen Armbruster designed the camera for A. Pparate & Kamerabau in Germany. Schneider Kreuznach Radionar lenses. Eventually Armbruster took his designs to King where the camera was released in 1961 as the View-Master Stereo Color Camera. Film travels diagonally through the camera, which allowes for more exposures per roll. The camera made 14mm x 12mm exposures. It used regular 35mm film, but it traveled through the film compartment diagonally so that the images could be shot on both the bottom half and top half of the film at the same time which eliminated the need to shoot the top half of the roll, then reverse it and shoot the bottom half. This not only simplified construction of the camera as the lenses and shutters didnt need to move, but it also eliminated gaps in the exposures, resulting in more stereo pairs per roll. Today, the View-Master Personal Stereo Camera is highly sought after by both camera collectors and fans of the View-Master system itself. Despite being discontinued half a century earlier, Sawyers and the companies who would eventually acquire the rights to it, would continue manufacturing blank reels and an underground market of people seeking out these cameras to make new reels has been strong. Even for those who have no interest in making their own View-Master reels, the camera itself has a beautiful and distinct look that makes it a desirable addition to any collectors shelf. Finding these cameras in good condition can be very expensive. The item “Vintage VIEW-MASTER Mark II Camera 35mm film Stereo 3D Color with case-Germany” is in sale since Wednesday, November 17, 2021. This item is in the category “Cameras & Photo\Vintage Movie & Photography\Vintage Cameras\Stereo Cameras”. The seller is “catmandrew” and is located in Sarasota, Florida. This item can be shipped worldwide.